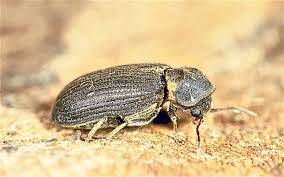 At Healthy Abode not a month goes by without us doing an independent timber survey for a worried house purchaser or owner.

Over the years we’ve seen a number of methods, for both assessment and treatment of Death Watch Beetle attack. Many of which have been of limited success. At Healthy Abode, we don’t condone the ‘napalm’ style of blanket spraying, just because some ‘holes’ have been found in timber. Instead, we take a sensitive non-destructive approach, utilizing techniques for locating and quantifying the extent of infestation so as to provide a far more accurate assessment of the structural implications of the Death Watch Beetle infestation. This conservative, effective and environmentally safer approach enables historic timbers to be safeguarded.

We’re often asked how ‘Death Watch Beetle, Xestobium rufovillosum) to use its Latin name, got its name. Well we answer, to attract mates, these woodborers create a tapping or ticking sound that can be heard in the timbers of old buildings on quiet summer nights. In days of old, when a person died they were often placed in the church and the immediate family would keep vigil with their dead. The beetle noises in the oak timbers of the church were heard and the beetles therefore got its name, ‘Death Watch Beetle’. By extension the superstitious have seen the Death Watch Beetle as an omen of impending death! Though our surveyor, Stuart’s quick to point out, he doesn’t believe the superstitious ‘impeding death’ part!

The Death Watch Beetle is native to the British Isles. The insect naturally inhabits the dead wood of several hardwood species found throughout the United Kingdom. Typically we see evidence of the Beetle’s larvae where fungal decay and/or high moisture content have made the heartwood hardwood more palatable.

The vast majority of structural oak used in historic buildings was converted and assembled green, this means that the timber hadn’t seasoned. The trees freshly felled, still yielded high moisture content. Heartwood is very dense and in the larger sections, the moisture content would have remained high enough to sustain fungal attack for many years, and so a suitable environment for long term Death Watch Beetle infestation would have been present in the building from the outset. Lack of maintenance over the ensuing years may have permitted periods of water ingress, particularly during winter months, this would of permitted new fungal attacks to occur, providing fresh food sources for the Death Watch Beetle larvae to consume.

Our surveyors use relative humidity meters to assess moisture content of the air, temperatures of the walls, and moisture meters to inspect % wood moisture content of the timbers. If necessary, and it sometimes is, we can take moisture contents from within the core of the timbers. A relatively small change to the buildings environment can cause an infestation to die out, or on the other hand, become more active. Typically, when assessing timber moisture contents in excess of 18%WME give rise for concern. Therefore one of the first actions is to check for water ingress. It is of course essential that moisture levels in surrounding masonry are also measured and reduced as necessary: if this is not practicable, the timber should be isolated from the damp masonry as much as possible.

Do spray treatments work? Well we’re of the opinion that it does, but the clients got to realize that surface spraying would only penetrate a few millimeters into heartwood. So the larvae won’t be killed until it emerges, when it’s body comes into contact with the pesticide; and remember the long-life cycle, upto 12years! Consequently, the importance of cleaning down timbers, removing all dust can’t be underemphasized. Another problem to spray treating, is that the larvae don’t like the treatment! So if it can come out of the timber elsewhere, such as in a dark crevice or crack, which is free from treatment then it will! Another point on spray treatment is that the pesticide not only kills the larvae, but also the beetle’s only natural predator within buildings, the spider.

What other treatments are on the market for Death Watch Beetle? Well, in an attempt to avoid the hazards associated with solvent-based chemicals, water based emulsion fluids have been introduced, but evidence suggests that in heartwood, their depth of penetration is even less than the solvent-based fluids. Pastes, commonly known as mayonnaise, are also contact insecticides and do allow for a slightly deeper penetration and greater effective concentration of chemical. Though the method of application still suffers the same limitations as surface spraying, and is even more difficult to apply where access is difficult. Other treatments including pressure injection, irrigation smoke treatments, and gas fumigation all too have problems and should only be specified when a thorough survey has first been undertaken. Similarly, the modern treatment of heat sterilization, which raises temperatures to 55ºC maintained for 60 minutes to kill all wood-boring insects, has been touted as a cure. But, when you consider the thickness of timbers, combined with the effects of high temperature on delicate finishes the problems don’t reside.

So what can you do? Well at Healthy Abode, we recognize that almost all problems with Death Watch Beetle are a result of timber decay due either to original design faults or poor maintenance. Therefore, the remedy to Death Watch Beetle infestation should be considered as an integral part of a building’s repair and maintenance programme and not in isolation. That is why our detailed independent damp, timber and mould surveys are so crucial in tackling your Death Watch Beetle infestation. That’s why treatment on it’s own is of limited success, we know, as we’ve gone to many a property where remedial treatment companies, not independent surveyors have gone in first!

But your services cost!, Yes they do, but if you consider the amount of treatment necessary, the volume of toxic chemicals used, the equipment, manpower, access equipment, cost of guarantee’s etc, then suddenly our survey cost is almost negligible, especially if it saves a mis-diagnosis by those treatment companies who have a vested interest in finding work!

So if you have a timber infestation and aren’t certain if its active or historic, the type of wood boring beetle infestation and /or the best treatment method, contact us for further advice on 01245 206 250 or info@healthyabode.co.uk.